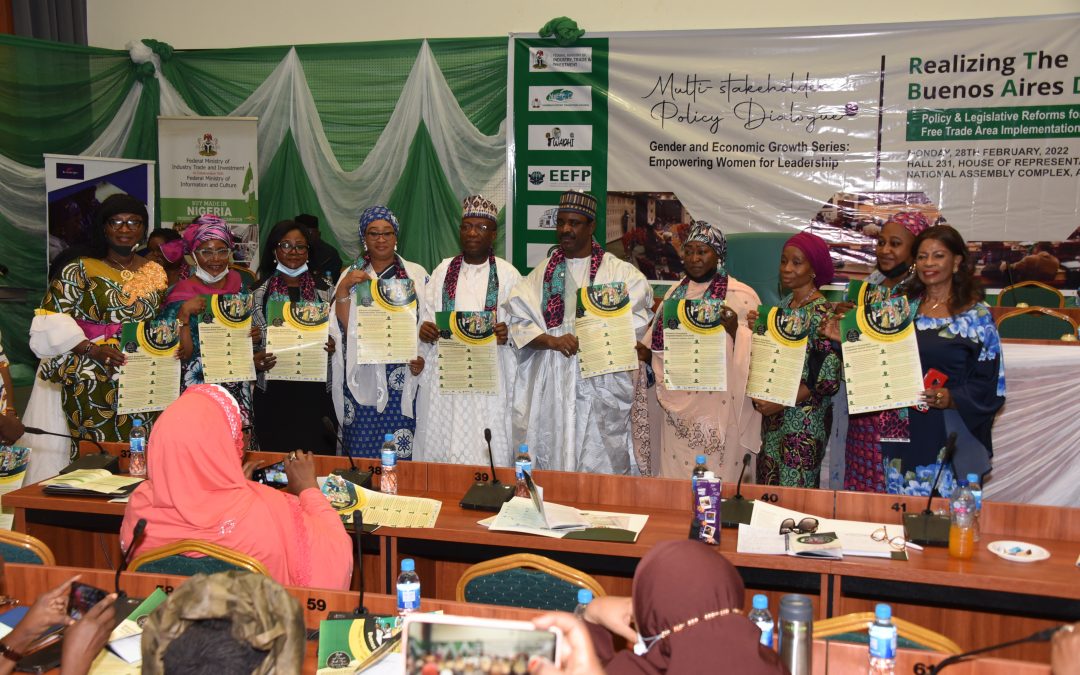 As a follow-up to the Townhall meeting with the theme “Buenos Aires Declaration: Pathway to Inclusive African Continental Free Trade Area Implementation in Nigeria”, this multi-stakeholder policy dialogue was held to stimulate relevant stakeholders, including the private sector to think innovatively on how to catalyze access to financial, trade, technology, and market opportunities especially for women.

“The Nigerian Women have called on the National and State Houses of Assembly to set in motion modalities to domesticate the Buenos Aires Declaration to ensuring that the Legislative Agenda and African Continental Free Trade Agreement AfCFTA provide economic growth opportunities for all regardless of gender.

The domestication, they said, would enable women to benefit from the projected N75bn annual retail market and other business prospects it offers.

The demand among other significant issues were discussed during the “Multi-stakeholder Policy Dialogue Realizing the Buenos Aires Declaration: Policy and Legislative Reforms for Inclusive African Continental Free Trade Area Implementation in Nigeria,” which took place on Monday in Abuja.

They also demanded for the review of existing laws to provide clearer legal framework for the public and private sectors to promote the UN Global Compact Women Empowerment Principles, WEPs, especially relating to gender and procurement in Nigeria.

They further asked the government institutions and regulatory agencies to work together and synergize to reduce double burden on MSMEs and harness the productivity of women who constitute over 65% of the informal sector across value chains.

They said government and financial institutions should end the rhetoric on financial inclusion for women by simplifying and concretizing women’s access to financing especially for WMSMEs as women have accessed less than 12% of financial credit due to bureaucratic and other barriers.

They appealed to relevant MDAs to provide practical steps and guidelines to eliminate unfriendly visa processes, reduce GBV and other forms of exploitation that impedes trade and movement of goods and facilitate access to foreign markets for WMSMEs.

On her part, the Convener of Women Arise Development and Humanitarian Initiative WADHI, Mrs. Esther Eghobamien-Mshelia advocated for the creation and implementation of policies and legal frameworks that will expand women’s opportunities and lead to teir economic empowerment at the national and regional levels.

“70% of workers in health and social sectors are women. But in the age of artificial intelligence; age of digital economy, we have robotics now. They are preparing robots to take over the work of women who are care givers.

“If that’s what’s in the oven, how are the laws protecting the women? How can we push the change of the transition from this kind of the economy so that women do not suffer?”

Sulaiman added that the legislatures had an important role to play in ensuring the implementation of those agreements and also in addressing challenges that women and women-led businesses, faced in trade agreements, noting that gender mainstreaming in free trade agreements was becoming an increasingly common practice.

Also, while declaring the event open, President of the Senate, Ahmad Lawan said that women have an important role to play in trade.

Lawan, who was represented by Sen. Sa’idu Alkali (APC-Gombe), called for more support for women engaged in various trades.”